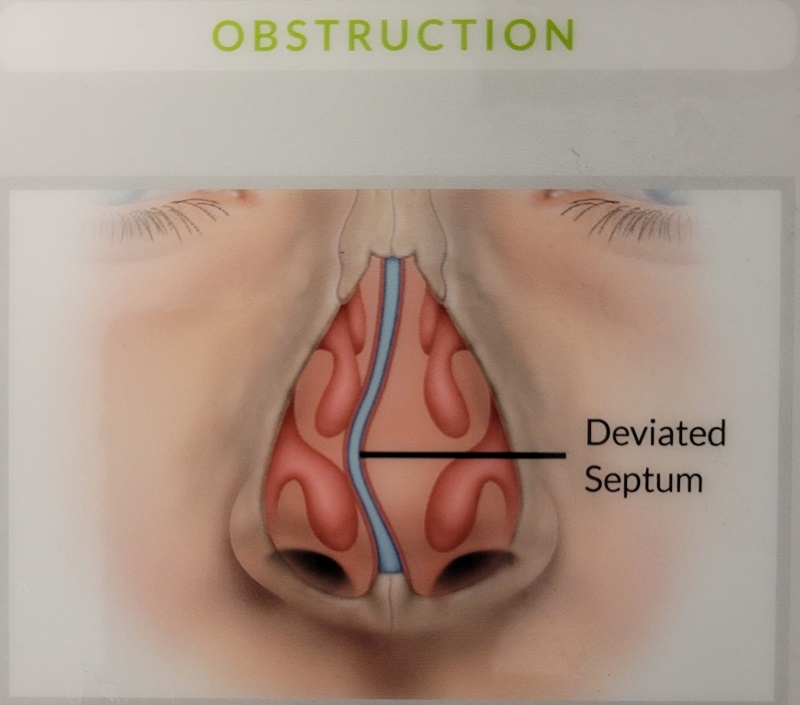 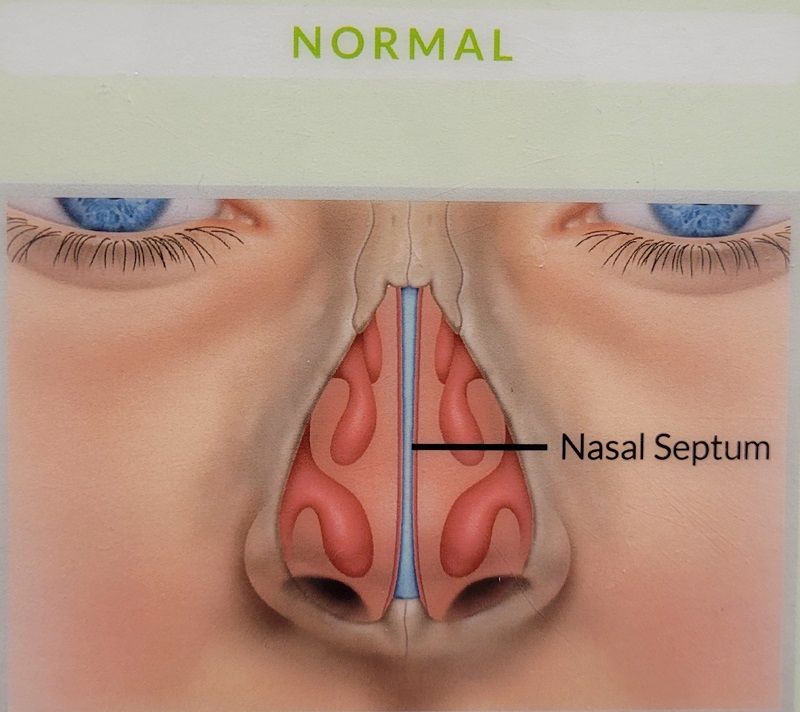 OVERVIEW: The nasal septum is a structure composed of cartilage and bone that divides the inner nose into two large spaces. It is important for maintaining the structure of the nose and in allowing streamlined airflow into the nose and lungs. A deviated septum means that either all or a portion of the septum is positioned poorly so that it blocks the airflow in one or both sides of the nose. Up to 80% of people can have a deviated septum from birth. Nasal trauma or previous surgery can also result in a deviated nasal septum. Additional nasal blockage can occur from spurs or shelves (cartilage or bone) that arise from the septum and block the nasal airway.

SYMPTOMS: A deviated nasal septum can cause symptoms of nasal blockage and increased sense of nasal congestion. They can also cause blockage of sinus outflow tracts causing sinus infections or pressure in the face and head. Patients may note that that their outer nose also has a deviation that corresponds to the inner deviation. The deviated septum can also cause sleep problems like restless sleep and snoring. Patients also note problems when exercising and exerting themselves. Chronic mouth breathing with dry mouth and throat is also a symptom of a deviated septum. Nosebleeds are also common in patients with a deviated septum.

CAUSES: The majority of deviated septums are present from birth as they reflect how the anatomical development of the nose, face and mouth are closely intersected with each other. Trauma is another reason one can develop a deviated nasal septum. Rarely autoimmune, benign growths or cancerous conditions can case changes in the septum which can results in deviation. Prior surgery of the nose and sinuses may also result in a deviated septum.

DIAGNOSIS: A deviated nasal septum is diagnosed from a patient’s history and a good physical exam of the nose and sinus passages. Nasal Endoscopy is a diagnostic tool used to a get a clear and through visualization of the nasal septum and surrounding structures in the office. A CT Scan is also helpful for analyzing in detail the structures of the inner nose to determine the cause of the symptoms and treatment options.

TREATMENT: Initial treatment is nasal sprays and saline rinses to try and improve the obstruction from the deviated septum. Allergies and acid reflux should also be treated. In majority of cases, the treatment of a deviated septum is surgical since this is primarily an anatomical problem. Modern surgery for deviated septum repair is minimally invasive with short recovery times. It is covered by insurance as well. Patients also can elect to have outer cosmetic changes to the nose when having surgery for a deviated septum.

VISIT OUR STATE OF THE ART OFFICE

REQUEST YOUR NEXT VISIT TODAY!

Font Resize
Contrast
Accessibility by WAH
Call Us Text Us